The last week of my trip to the states, I spent in NYC together with my parents and one of my sisters. We explored Times Square, which we discovered was a terrible place to be on a Saturday. It was so crowded, the odds of getting hit by a person or a taxi were the same as a train being late in Stockholm. Or at least so it felt. Thankfully we made it out safe and sound.
We took a stroll through Central Park one sunny day and I got to do the coolest thing ever. I got to pet Balto, or at least the statue of him. The wolfhound who was my cartoon-hero in my favorite movie as a child.
One night we went to a jazz club where a live band played swing music and everyone was dancing, all of them extremely well. My sister and her friend joined in and totally ruled the dance floor. At the end I was invited up to dance. A little bit slower thankfully and with two of the coolest guys I’ve met. One of them was around 80 years old! His sense of rhythm was flawless and his love for dancing made him glow with happiness. It was an honor to dance with him.
Another night, we went to see a Broadway musical. “Matilda” based on the classic novel by Roald Dahl. It was sassy, hilarious and wonderful! The role of the ghastly principal Mrs. Trenchborn was played by a muscular athlete with the voice of a god. He was so perfect for the role and made me laugh out loud countless times. The children were all so impressive in their roles and the ensemble performances imaginative and carried out with precision. Magical.
When we woke up the day after the musical, the weather was warmer than it had been in days. A slight drizzle in the air though. We got on the subway to visit my mum’s friend who has an apartment in central Manhattan close to the water. The view was exquisite, one could see both Manhattan and New Jersey. We shared a lovely brunch together before heading to the ferry terminal. A sightseeing ferry with roof (good because it was raining) picked us up to take us around the island. It was great seeing all the buildings and smaller islands around the majestic Manhattan. The statue of Liberty was amazing of course. The down part with this little voyage was the guide. An ex history teacher in the upper years who was convinced his jokes were top comedian standard. Cringe worthy. 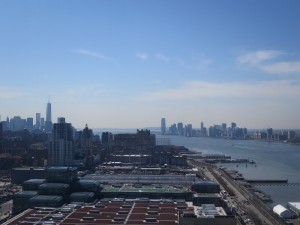 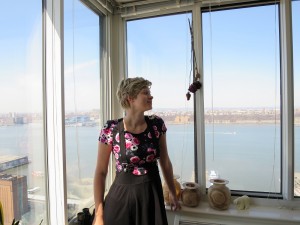 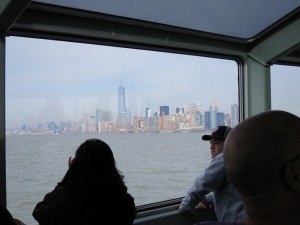 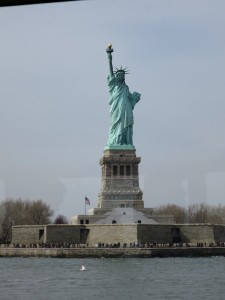 That night we ended up in Greenwich and found a tiny café full with people. It was called the Path Café and they had Open Mic night. Many amazing singer songwriters went up on stage and I could not believe that those people were not signed or famous. They were able to squeeze me in as one of the last performers and I played two originals: “Nightingale” and “Garden of Unicorns”. It was a really cool last gig in NYC. I truly have to go back to do more.
The last day we wandered the highline, an old train track offering a marvelous view of the Meet Pack District which itself is a wonderful little part of town. Old slaughter houses of reddish brick which had been restored and turned into fabulous little shops offering high fashion clothes and jewelry. We also found Chelsea Market in the area, a perfect food market with imaginative organic foods and vegetables. It featured, among plenty others, a little hat shop, a vegetarian sushi restaurant and a mini donut shop.
New York is such a cool place and I will need more time to explore every little corner of it. It’s vibrating with the air of all the cool people and the creativeness it harbors. And pulsing with the ambition of all those who seek success. Scary, but oh so beautiful.
« The Big Apple » Garden of Unicorns